The Transitional Period An Overview Of The Bible 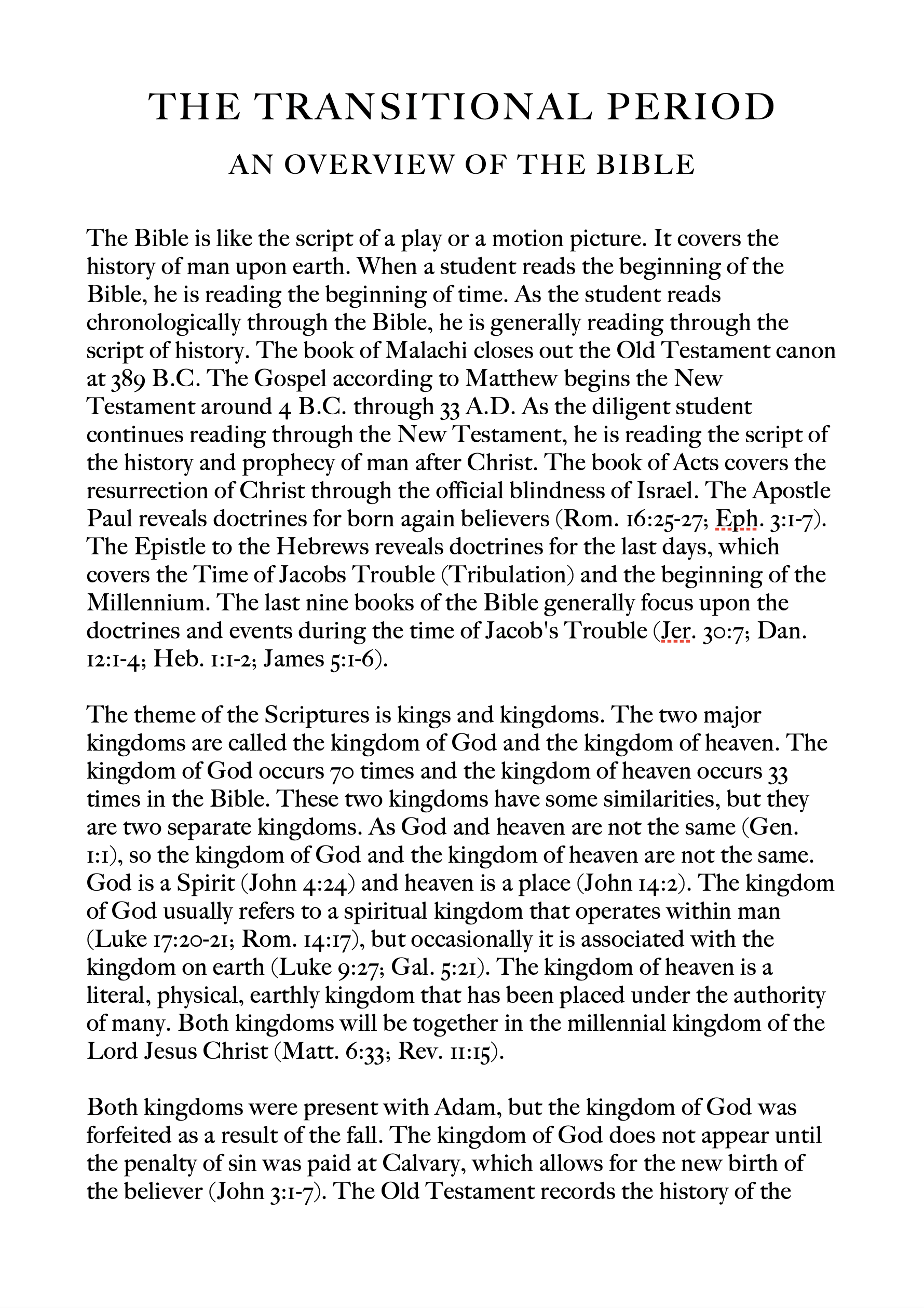 An Overview Of The Bible

The Bible is like the script of a play or a motion picture. It covers the history of man upon earth. When a student reads the beginning of the Bible, he is reading the beginning of time. As the student reads chronologically through the Bible, he is generally reading through the script of history. The book of Malachi closes out the Old Testament canon at 389 B.C. The Gospel according to Matthew begins the New Testament around 4 B.C. through 33 A.D. As the diligent student continues reading through the New Testament, he is reading the script of the history and prophecy of man after Christ. The book of Acts covers the resurrection of Christ through the official blindness of Israel. The Apostle Paul reveals doctrines for born again believers (Rom. 16:25-27; Eph. 3:1-7). The Epistle to the Hebrews reveals doctrines for the last days, which covers the Time of Jacobs Trouble (Tribulation) and the beginning of the Millennium. The last nine books of the Bible generally focus upon the doctrines and events during the time of Jacob’s Trouble (Jer. 30:7; Dan. 12:1-4; Heb. 1:1-2; James 5:1-6).

The greatest doctrine of the 1611 Authorized King James Bible is when the main Person of the Bible is crowned the King of kings and Lord of lords, the Lord Jesus (Luke 24:25-27; Rev. 19:11-16). The first four books of the New Testament focus upon the earthly ministry of the Lord Jesus. Matthew focused upon the King of the Jews (Matt. 2:2). Mark focused on the servant of the Lord (Mark 10:45). Luke concentrated on the humanity of Jesus (Luke 19:10) and John concentrated on the deity of the Saviour of mankind (John 20:30-31). These books constitute a transition from the Old Testament into the New Testament.

The three main transitional books are Matthew, Acts, and Hebrews. These books are dangerous to rest upon for doctrinal issues. The book of Matthew operated under the Mosaic Law until the death of Christ (Matt. 27:50; Heb. 9:16-17). The Lord prophesied that both kingdoms were at and, but this was conditioned upon the acceptance of the Messiah by the people of Israel (Matt. 11:12-14; 17:10-13). The Messiah was rejected and crucified. During the crucifixion the Saviour petitioned the Father to forgive the Jews. The LORD answered that prayer and gave the Jews another opportunity to receive their Messiah in the book of Acts. As the book of Deuteronomy refers to a second giving of the Law so the book of Acts refers to the second opportunity for the Jews to accept their Messiah (Acts 2:36; 3:14; 4:10-12; 7:51-53). The Jews as a whole rejected the Messiah again; therefore, the book of Acts records the transition from the Jews to the Gentiles (Acts 28:25-28). The book of Acts also records the transitions from Israel to the church, from Peter to Paul, and from Jerusalem to Antioch.

The Apostle Paul records the doctrines for the Body of Christ (Romans 11:13; 2 Corinthians 11:2), which is made up of born again believers in the Lord Jesus Christ. The primary ministry of the Lord was Jewish (Matt. 10:5-6; Rom. 15:8), but the primary ministry of Paul was to the Gentiles (Rom. 15:16). The saved Gentiles primarily make up the Body of Christ. After God resurrects the born again believers in Christ during the Rapture (1 Thess. 4:13-18), God will commence with the prophecy of the Seventy Weeks of Daniel because there is one remaining week to fulfill (Dan. 9:24-27).

The book of Hebrews records the doctrines for the people during the Seventieth Week of Daniel’s prophecy. This is called the last days because it is the final days of the dominion of the Devil and the Gentiles over the kingdoms of the world. Hebrews is a transition book that is opposite of the book of Acts. Everything reverts back under the Mosiac Covenant, but it has been amended by the doctrines of Hebrews. The amendments of the sacrifices of the Law will be necessary because the penalty for sin has been paid by the sinless blood of the sinless Lamb of God (John 1:29; Heb. 9-10; 1 John 1:7; Rev. 12:11).

Since the word of God is not bound any honest and sincere use of the text in this work is granted. No monetary gain for use is granted. Dishonest use is forbidden and unlawful.

2 Timothy 2:15 Study to shew thyself approved unto God, a workman that needeth not to be ashamed, rightly dividing the word of truth.